This blog post was also published on the Ludum Dare Blog.

You don’t want to read the success stories all the time, right? Sometimes you can learn from something that failed more than from what made it, right? So here it is, the little story of PONY! and how it became what it is. For your reading pleasure I included some pictures of concepts of my journey from hating the theme to missing it by a mile. Enjoy!

“You Are the Monster”.

So yeah, I had a pretty hard time with the theme at first, mostly because I was overthinking stuff. I started my research with probably all the others on Wikipedia, drilled down through German and Austrian mythological creatures but hit rock bottom soon after.

Working Title: “From R’lyeh with Love”.

Then suddenly the floodgates opened and in a frenzy I drafted a design document outlining a roundbased strategy game about the rise of a Lovecraftian monster, bent on opening the dimensional rift for its race of alien creatures to destroy human life on this world. Only problem: I never coded a strategy game before, let alone such a complicated one. I had it all: Gain a cult following, spread fear by causing nightmares, be hunted by scholars all over the world, drive people into madness, ritual executions, human sacrifice, dogs and cats living together – mass hysteria! Just too big for 48 hours. Let’s file it for later. But hey, at least I did a quick mock-up of the world-map. 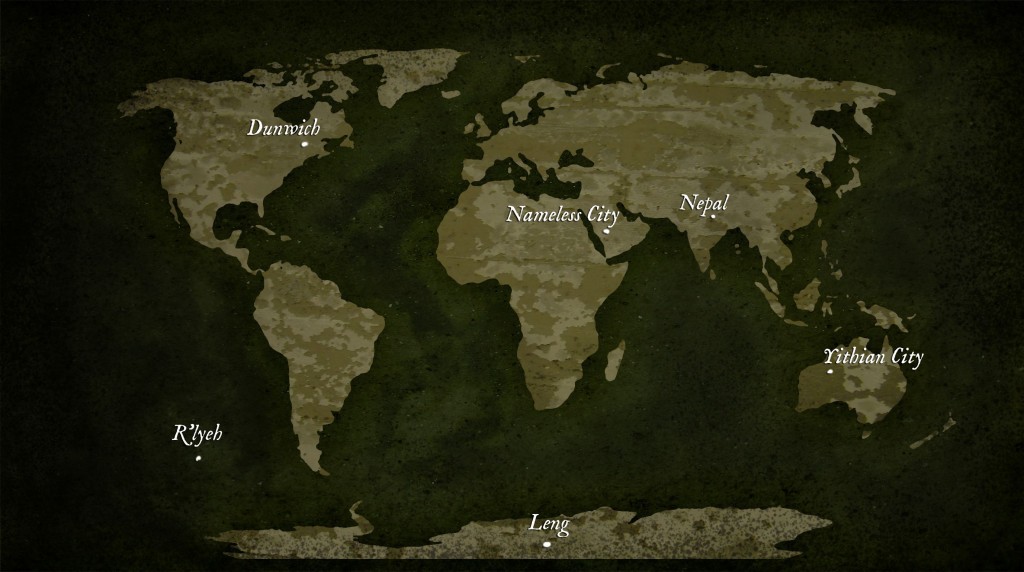 The next day I was borderline on quitting because I knew I could not make it. And I was out of other ideas beyond “You are Bowser, and you would have gotten away with it too if it weren’t for those meddling plumbers!”. With gloom, I got in my car to just drive, clear my head and hope for the best while cruising around aimlessly the Austrian countryside.

300 kilometers and four and a half hours later I was back. My idea was desperate, stupid and silly. Essentially the game would be centered on a pony whose name was Oatbush Derpgood who wants to become a mighty monster. So in Wario Ware-like mini games the players would have to perform heinous acts on unsuspecting people by a cute and chubby little pony. I went right to work in Photoshop animating the pony and Generic Dude #6845-b. The first action would be to kick people in the head. Satisfying. Simple.

Drawing and coding ate up quite some time and after 9 hours straight it was 7 a.m. and I had a working prototype of one mini-game without any winning or losing conditions. The pony just kicks people in the head with a satisfying sound I crafted in FamiTracker. No way I could make it into a real game with some more mini games and variations. So I announced my retirement from the competition on Twitter and went to sleep. 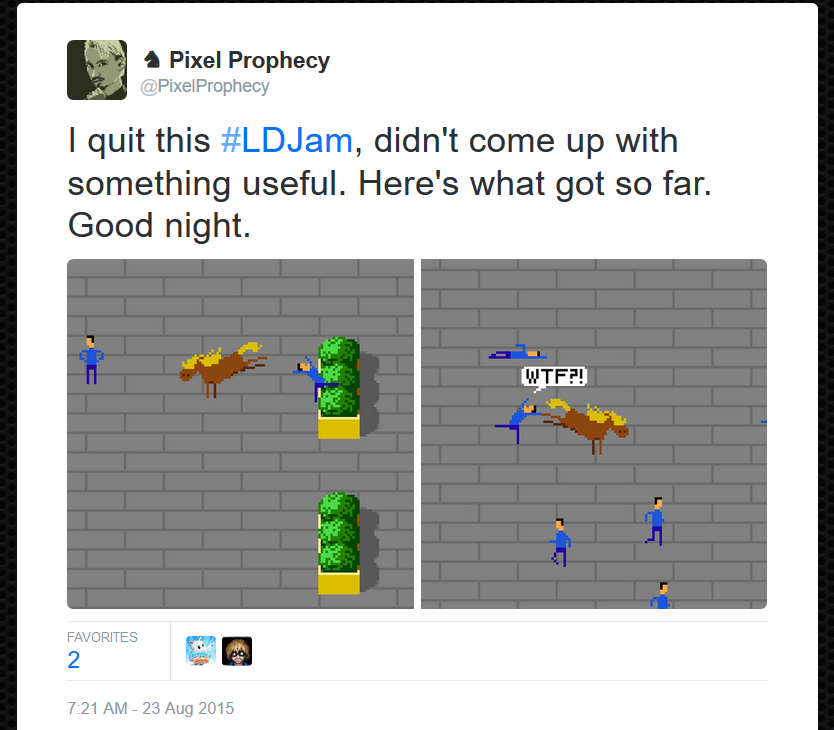 The remaining Sunday was nice. Went with my lovely Conny out for breakfast (or “dinner” as people would call it considering the time of day), went for a little trip through the woods and then spent two more hours at a McCafé, the only equivalent of a proper diner that would still be open. And those were productive two hours:

Completely abandoning the idea of mini games and the theme, I just dove right into the silliness and violence and filled a page with gameplay ideas in a frenzy. Now it should play like an arcade game with a timer ticking down. Each person you kick would award you a few precious seconds to keep going longer. Power-ups would grant you speed and extra time, obstacles would slow you down and you had to eat too on whatever you would find in the levels. Little girls trying to hug you would slow you down, and in some later level Big Boss from Metal Gear Solid V: The Phantom Pain would sneak up on you if you weren’t careful and affix a balloon on you (like in this actual gameplay screenshot). Did I mention you could also poop? Great times!

I am a sucker for referencing other games (I call it an homage, others call it a mental defect with me), so how funny would it be to play a frenzied pony in a Counterstrike match, duking it out to unsuspecting players?

Back at home with only 5 hrs left I decided to make the most of it and re-create the popular Counterstrike map de_dust2 with custom tiles and I reworked the Generic Dude sprites to resemble the terrors and counter-terrors of the game. Piecing together the map from my tiles took pretty long thanks to Game Maker’s inability to zoom in on a tile map, which had me squinting at single pixels on my 4k screen for longer than can be considered healthy.

Still, this wasn’t a game, just a concept demo featuring some funny sounds and animations. “Fuck it,” I thought, “let’s submit it anyway.” And with 20 seconds left in the compo before Submission Hour, I submitted the game with an apology.

Was it a waste of time?

No. Ludum Dare never is, even when you end up with nothing to show for. Last Friday I had never used background tiles in a game, never had done a solid collision detection and never animated something properly for a game by hand. Two days later I have done all that and also have a great starting point for a bigger strategy game based on my concept. It looks promising, at least. And with my silly PONY! game, I have a new pet project I can come back to whenever I feel like it.

Here’s the timelapse of my game creation on YouTube.